This site needs to place cookies on your computer in order to provide some of the functionality and to help us make the site better for you. To find out more about cookies see our use of cookies information. Please note some aspects of the site will not work unless you accept cookies.
Tick the check box to confirm acceptance of cookies from this site and then click the 'Continue' button.  Continue

Marlborough used to be served by two separate railway stations whose histories were intertwined. The two stations were built by different railway companies, the Great Western Railway and The Midland and South Western Junction Railway, which started as competitors but ended up under the same ownership. This led to some complex rationalisation in the operation of the railway lines that served the town.

The Railways Act 1921 grouped most of the railways in mainland Great Britain into four large companies, and the Midland and South Western Junction Railway was incorporated into the Great Western Railway, its rival for the rail traffic at Marlborough. For a few years, the GWR did nothing to rationalise the anomaly of having two parallel lines running into the town, but it did rename the stations. Confusingly the former GWR stations were named Marlborough High Level and Savernake Low Level, while the former M&SWJR stations were renamed as Marlborough Low Level and Savernake High Level.

Then in 1926, the GWR reopened the 1883 link between the two lines just outside the two Marlborough stations, enabling trains from the main line junction at Savernake Low Level to pass through Marlborough on to the north.

But the real changes came in 1933. The GWR built a second link between its original branch line and the M&SWJR line much nearer Savernake and closed the original branch and station in Marlborough to passenger traffic. The goods yard at Marlborough GWR station was retained, but was accessed from the north through the Marlborough M&SWJR station using the link that had been restored in 1926. 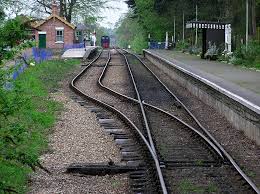 All passenger services were rerouted to the M&SWJR station at Marlborough. The GWR chose to operate the double track M&SWJR line as two separate single track lines: the former up line (towards Swindon) was used for the branch services from Savernake Low Level while the through north-south services which passed through Savernake High Level all ran on the former down line. This odd arrangement persisted through into British Railways days.

The Midland and South Western Junction line was very heavily used for troop and other military movements across Salisbury Plain in the Second World War, but after the war both passenger and goods traffic declined sharply in competition with road transport. Marlborough, about midway between London and Bath/Bristol, had become a focus for long-distance east-west bus services and the railway found it difficult to compete. The whole line closed for passenger services in 1961 by Dr Beeching, and that included the remaining branch line service from Savernake Low Level.

If you want to find out how to re-open a train station, click here:

Permalink
What is Biodiesel? →